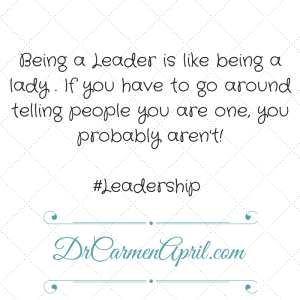 ” Being a leader is like being a lady. If you have to go around telling people you are one, you probably aren’t”

I love this statement! Not only is it funny, (I love some great humor every now and then) but it is true! I was recently talking with a colleague about a leadership role he had been assigned to. He didn’t ask for the role or even volunteer for it. His team recognized that he was already doing a great job of taking initiative and leading the group in the right direction and appointed him the leader! (P.S. – I am on this team and was the one who nominated him for this role!)

When you work diligently in your career, at work, in community organizations and ‘act’ as a leader should, you are essentially being a leader whether you have a title or not. LEADERSHIP is a verb, not a noun!! Again, LEADERSHIP is a verb, not a noun. It requires action! If your actions don’t signal LEADERSHIP, you may want to consider your effectiveness. Like my wise mother has always told me, “Actions Speak Louder than Words”. Quality LEADERSHIP speaks for itself!

Question of the day – Are you backing up your LEADERSHIP title with action??

This post is part of a series on Leadership presented by Dr. Carmen April. She is a young entrepreneur and community leader recognized as a 2013 Nashville Business Journal Top 40 Under Forty Award Recipient and is currently a 2014 New Leaders Council Fellow – Nashville Chapter.  Dr. April is available for speaking engagements on this topic.

For over 15 years, Dr. Carmen April has been leading teams and empowering others to tap into their leadership potential. She started a private medical practice in Nashville, TN within just a few months of moving to the city and grew it to over 1,000 New Patients in the first 2 years! As a Podiatrist, she medically and surgically treats a wide array of foot and ankle injuries and conditions. A large portion of her practice is dedicated to treating diabetic patients and the foot complications that are often associated with this disease. Honored as a 2020 Nashville Business Journal Woman of Influence Award Recipient, Nashville Emerging Leader Award (NELA) Winner, a Nashville Business Journal Top Forty Under 40 and Leadership Fellow of New Leaders Council, Dr. April has proven her Leadership acumen in career and community. She's been featured in local and national media sharing her expert tips on Foot & Ankle health topics, Leadership, Self-Development and Entrepreneurship. Dr. April is married to her wonderful husband, Mr. Lionel Washington, and they enjoy traveling and creating awesome memories together!